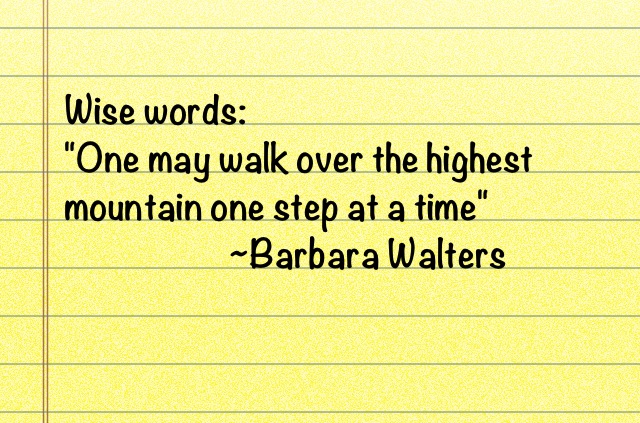 Barbara Walters has been in the news lately, as she is going through a rare case of adult chicken pox. I wish Barbara a speedy recovery. Barbara is someone I have great respect for, and the trail she blazed for women. Working at ABC, where she was the first female network anchor, she was challenged in this role. During this time she struggled with sexist remarks from her male co-anchor. She worked in a mostly male environment, who could not understand how a woman could be given such an important job in media. Two summers ago, I remember flipping through the television and coming across Barbara talking to the ladies of The View. Discussing this difficult time, she labelled it as some of the hardest years of her life. Ratings were low, and eventually she was asked to leave. She discussed how she thought her life was absolutely over while in the situation, and even afterwards. Barbara felt it was the end of her career, and she would never be on television again. As we know, that did not turn out to be true.

As I listened, I felt I could relate to what Barbara was sharing. It was not too long before watching this that I had been laid off from my own job. I too had felt pressures within my work environment, not sexism, but other environmental stressors that were not healthy for me. Due to restructuring of the company, I was layed off. At the time, I thought my world was at a standstill.  And just as Barbara felt, I felt multiple things: anger, sadness, and even relief.

As Barbara spoke, she mentioned that looking back; she feels it was one of the best things that happened to her. It made her stronger, wiser, and gave her the determination to never give up on her dreams.

At present, looking back on my own experience, the important lesson I learned is that you have to focus on your strengths during difficult times. With that, I mean you have to believe that challenging times occur for a reason, not to destroy us, but to make us stronger. It is common to think the worse like, "my life is over", and feel frustrated or upset about the situation. It's only human to feel this way.

Another notable person who rose to success after job loss is Steve Jobs. He was let go from Apple, the company that he helped create, only to go on and create another successful company. This is now known as Pixar. Steve later returned to Apple to create many products that we have come to rely on.

Just a short time ago, my job status was shattered. Now a year and a half later, I feel things have come together. Losing my job gave me the courage to start my own business, grow as a person, all while learning the ropes of entrepreneurship. Having no job allowed me to really think about what I wanted to do, and create the job I really wanted.

If you have recently lost your job, or are currently thinking of leaving your job, how do you cope? Ask yourself the following:

1.       Looking back at the challenges you have faced in the past, how did you overcome them? You need to ask yourself this (It's important)

Likely this is not the first time you've come across a road block in your life, and it certainly will not be the last. If you were not happy with how you overcame the obstacle, what would you have done differently? This will help you overcome the current situation you are in by problem solving.

The answer may not be clear right now, but you need to think about where your passions lie, and what really makes you happy. If you always dreamt of (fill in the blank), then maybe this is the time to pursue it.

Whenever you feel like you are alone in figuring out your career, or your path in life, remember all the great people who fell and got up again, and who are better for it.